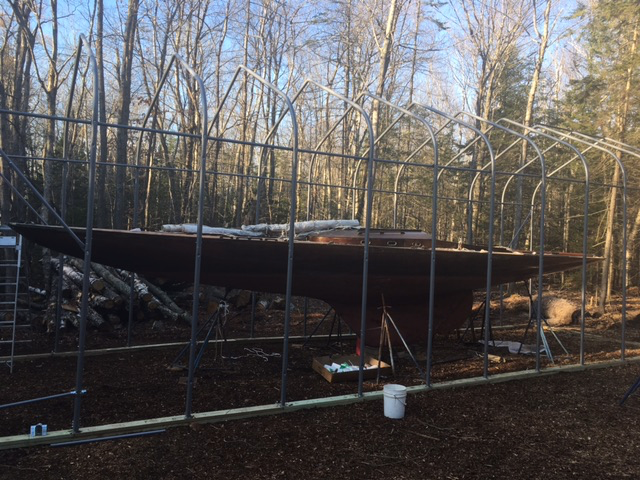 Ariadne has been moved out of the boatyard, and into her new home - a section of cleared woods in Scott’s parents’ backyard. The moving process was relatively painless, thanks to the generosity of the local boatyard owner and his team, and to Scott and his family who built the tent that will protect the boat from the elements as she is being restored. We are now able to begin the process of taking apart pieces of the hull in the most vulnerable areas, and really assessing the scope of what we are working with.

The transfer of Ariadne out of the boatyard was smooth. She only had about two miles to travel on the road, but given her long overhangs and questionable structural integrity, we really wouldn’t have wanted to move her any further. Up she went onto the hydraulic trailer (which will also be used to launch her when she is ready), and off into her home in the woods. 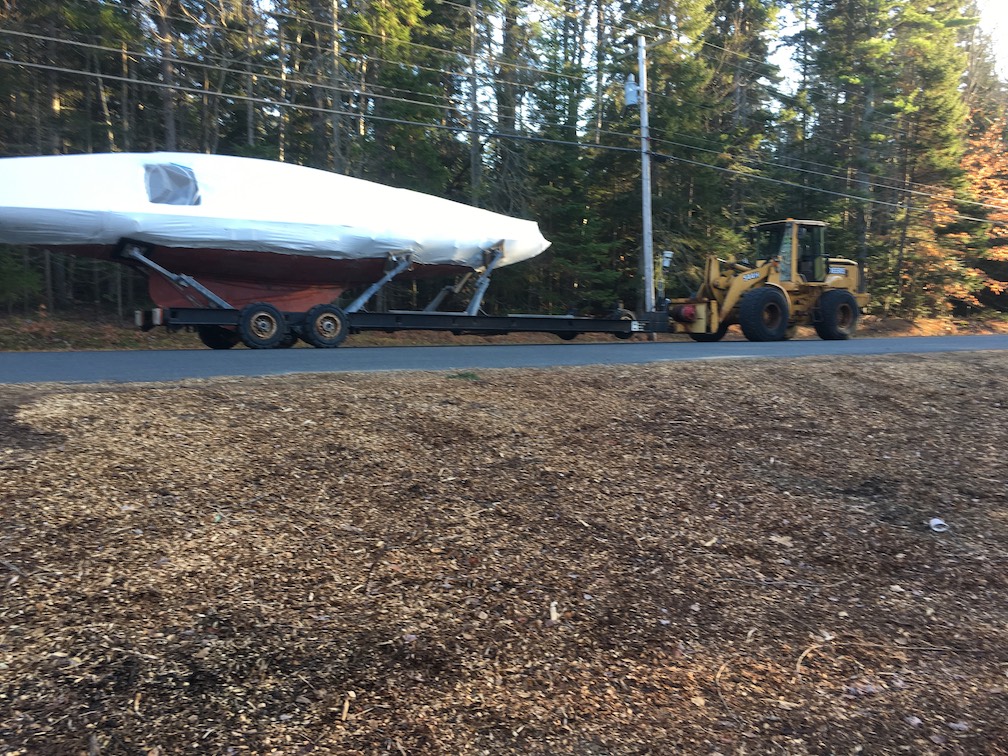 Ariadne will take shelter for the next few years in a auxiliary shed built from a kit; the pipe frame and heavy tarping should be sufficient to keep her protected from the elements, and will give us enough room to stand on the deck and move about the boat underneath. It would be nice to have a bit more space, but it should do the job just fine. 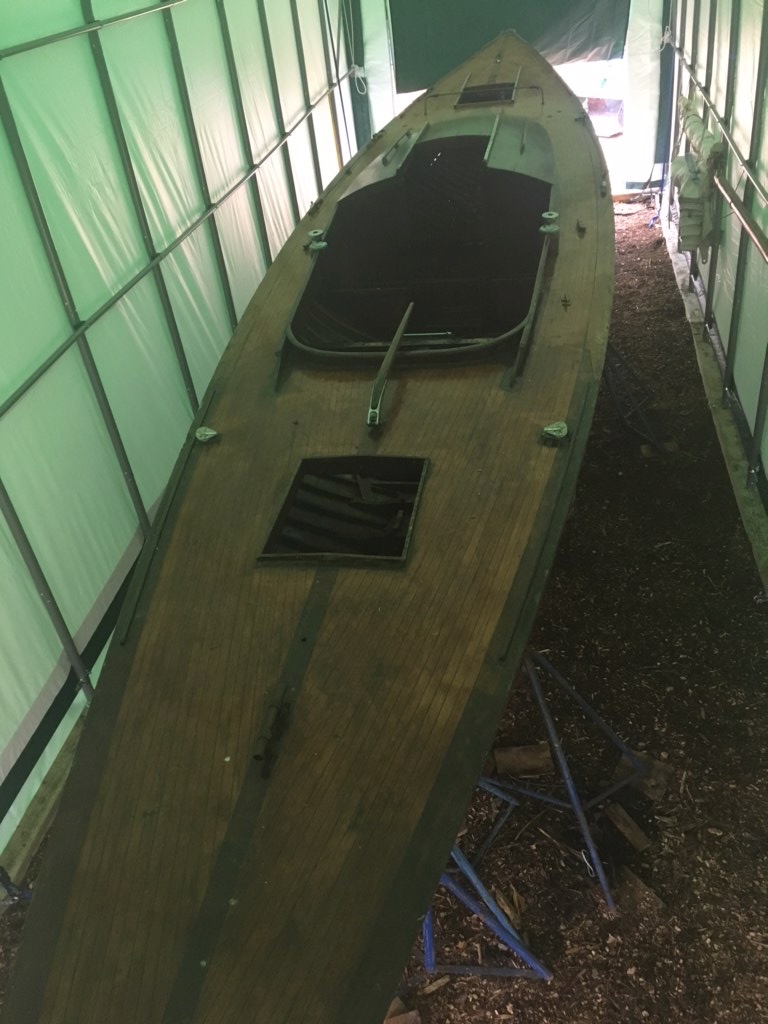 The next step was to being removing a few planks in areas that we could see are suspect. This is an exciting and somewhat terrifying part of a project like this - you’ve already committed to the work based on your best estimates of the scope of work, time, and cost, but now you really get to see what you’re up against. We knew for our initial surveys that the boat leaked like a seive, and needed many new structural parts including keel timbers and frames. We also knew that the keel timber had suffered from being dried out over the years, and may need new wood. Cotton caulking is visible in the picture below, which was an attempt to stop leaks low in the bilge - this boat was designed not to be caulked, so called tight-seamed carvel planking, which is very unusual outside of classic scandinavian designs. The photo also shows some shakes in the forward keel timber - cracks that have opened up along the grain, probably due to being so dried out over the past five years sitting up on land. 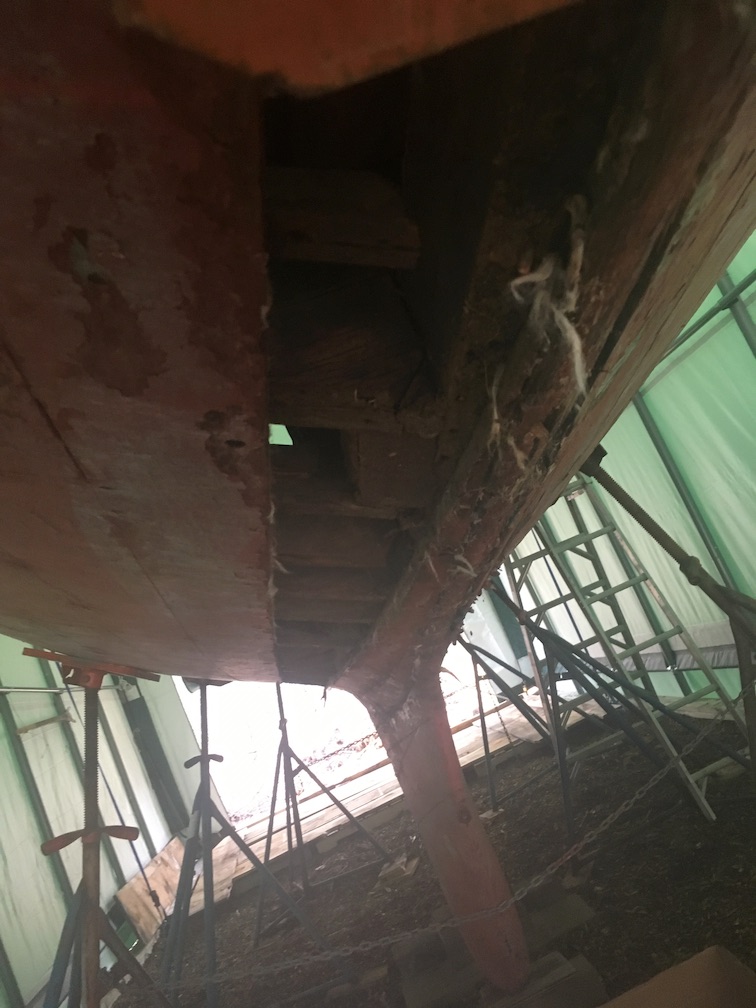 From the inside looking out, we can see that things actually look pretty good for a boat of this age. This boat was very lightly built, and we plan to beef up the floor timbers and the ribs that we replace, using laminated oak. Even from a distance, many of the floor timbers are visible deteriorated and will be replaced. The floor timbers are responsble for keeping the lateral halves of the boat together, firmly tied down to the keel timber - the backbone - running down the center. Especially between the mast step and the ballast keel, any weakness in this area can open up seams and cause potentially catastrophic failure. Consequently, beefing up and replacing keel timbers is job one for us. (Notice the antique threaded screws on either side of the mast step, which are responsible for forestay tension!) 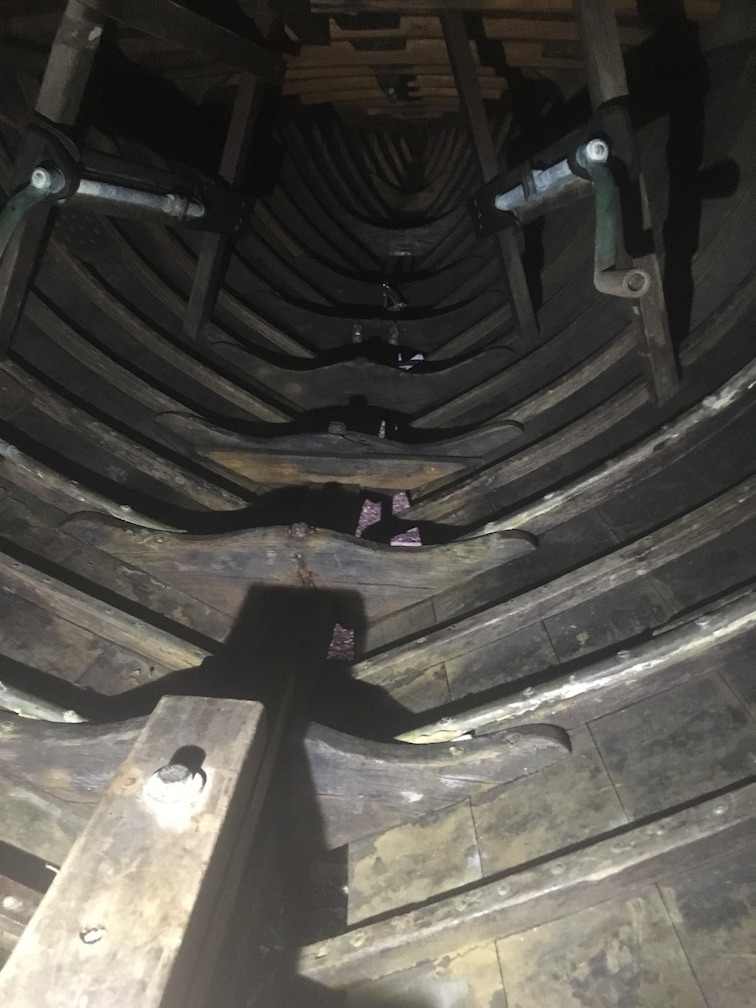 Scott has made templates of the forward keel timbers, which we will rough out away from the boat and then install over the summer. At that point, we will also have to assess the health of the keel timber where the forestay attaches to the boat; this is a critical part of the backbone, and needs to be healthy and strong. We will also decide which frames to replace, and will likely replace the metal frame caps that top the bent frames as visible in the picture below. 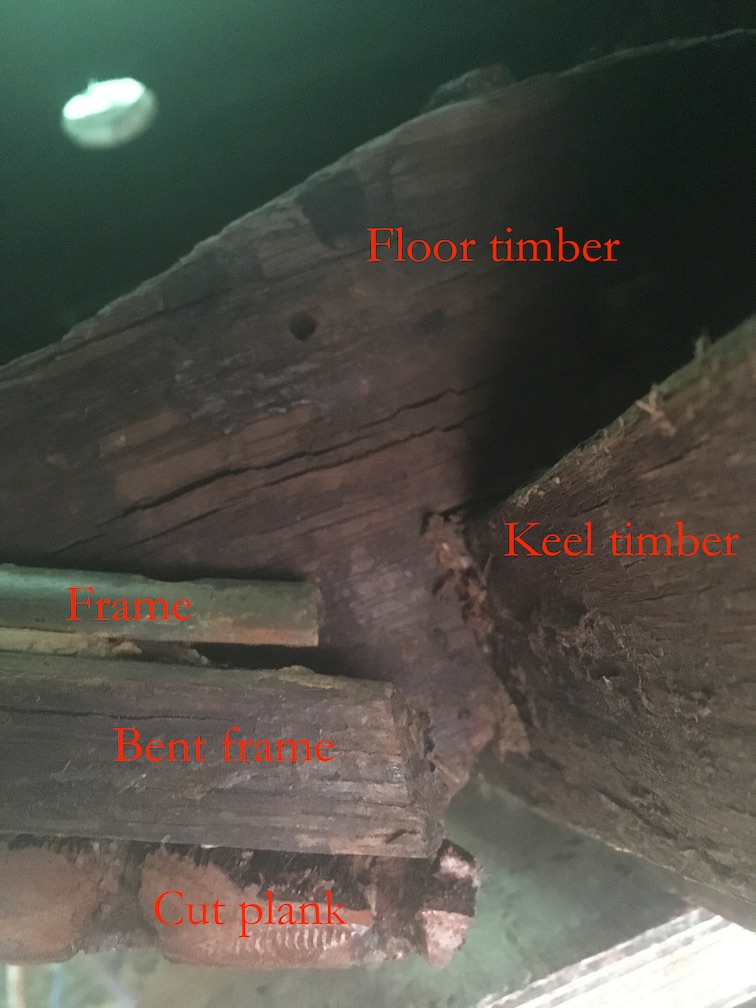